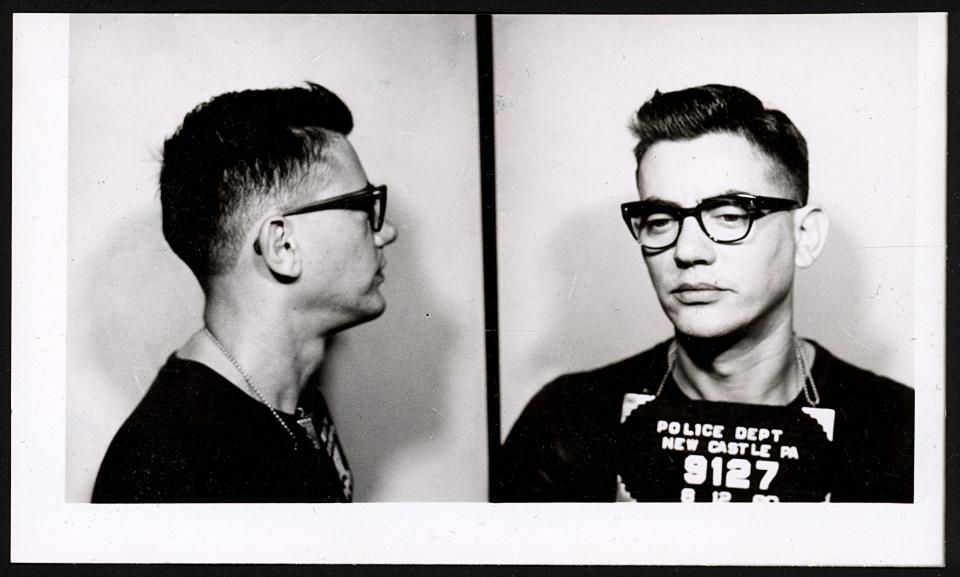 Sidney Fell and William Dugan were arrested for engaging in an act of sodomy in an empty office on the fifth floor of the Greer building on North Mercer street. They had been discovered after occupants of the building, on the look-out for a thief who had stolen $17 from a secretary’s wallet the day before, had noticed the two men loitering suspiciously in the corridors.

Sidney ran a window-cleaning business; William was a manual laborer and petty criminal who had been arrested the year before for assaulting Sidney in his home and robbing him of $55. (He had been released when Sidney had withdrawn his complaint and declined to press charges.) They were sentenced to four to eight months in the county jail.

Sidney’s parents were Austrian Jews. His father, Herman, had arrived in New Castle in 1905 and became the town’s first window-washing contractor; his mother, much younger than Herman, died of a year-long illness a few days after Sidney’s first birthday.

Sidney ran away from home when he was sixteen. He took a train to Chicago and another to Omaha, Nebraska, where he was accepted by a home for troubled or neglected children that had recently been made famous by a film called Boys Town, starring Spencer Tracy and Mickey Rooney, which played at the Penn theater when Sidney was fourteen, and had been featured in a long Joe Palooka comic strip storyline that ran in the New Castle News the year before he left town.

Around two hundred boys lived in the orphanage, including the youngest bank robber on record and a boy who had killed his father. Sidney liked it a lot. He stayed there for two years before returning to New Castle when he turned eighteen. He moved back in with his father and his older brother and cleaned windows for a year until America entered the war and he and his brother were drafted. Sidney went into the marines and spent two years handling mail in the South Pacific; his brother, Emanuel, went into the army and took part in the invasion of Normandy and the liberation of Holland before being killed in an ambush outside Bastogne, in Belgium—the same incident in which Frank Bullano earned his bronze star.

Sidney’s father’s death from a heart attack, ten years after the end of the war, left Sidney, at forty, all alone in New Castle and the sole owner of the family business. From that point on, he became ever more involved in the New Castle Playhouse, the town’s largest amateur dramatics company. He started out as a supporting actor but ended up taking lead roles and staging ambitious productions of Broadway shows.

In May, 1963, Sidney produced the New Castle Playhouse’s version of Guys and Dolls. The drama critic of the New Castle News gave it a positive review, but remarked that the players appeared confused, that it was difficult to identify with the characters, that people entered and left the stage too early or too late and that the lights and curtains were operated rather poorly. Sidney wrote the following letter in response.

“Dear Sir, I believe your so-called drama critic is grossly unfair. His review of our opening night last Thursday was too severe. Who does he think we are? We are only amateurs and we will be the first to admit it. We feel there are not enough community efforts in our city and without us and people like us this area would have even less community activities to express creative talent. I think this show is the liveliest and funniest show of the year and if you doubt either your drama critic or myself, come to the Playhouse and you will see which of us is right.”

The editor accepted the invitation. He had a good time, as Sidney had known that he would.

In the late sixties, Sidney set up the Drawing Room Players, which he billed as the experimental wing of the Playhouse. He used it to produce uncommercial plays by lesser known playwrights that would not otherwise be performed in New Castle. Its productions earned Sidney the best reviews of his theatrical career, with the New Castle News calling him “tremendously talented” and declaring his works to be a triumph.

Sidney died in July, 2007, at the age of eighty-three. William Dugan—who, it turned out, had been the thief who had stolen the secretary’s $17, thereby alerting the office workers to the presence of suspicious characters in the building and inadvertently bringing about the arrest of Sidney and himself—was arrested in 1974 for beating his son unconscious as a punishment for coming home drunk. There is no further record of his life.