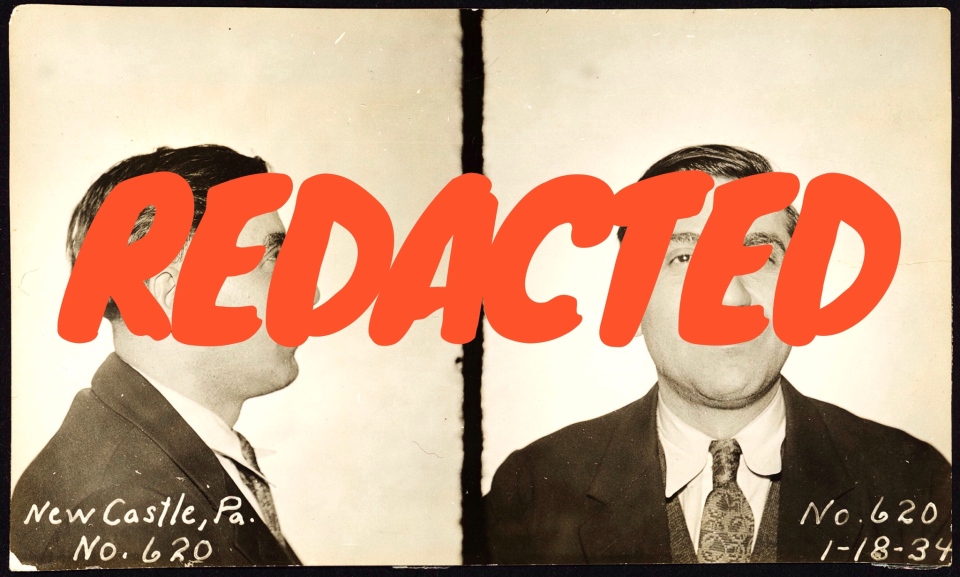 Last week, after I published a mug shot story about a New Castle businessman who ran a beach resort on a stretch of the Neshannock behind the paper mill’s dam, a long-time reader of the site who happens to be a film maker in Hollywood met an actor with family connections to the area. The actor has a career stretching back decades, with roles in Starsky and Hutch, Charlie’s Angels, L.A. Law and ER, and his family connection turned out to be the fact that his wife’s grandfather was the businessman I’d just written about.

The film maker put us in touch and we exchanged emails about New Castle, the mug shots and the life of his relative. He corrected a couple of mistakes I’d made and mentioned that the man had served in the first world war and had been given a veteran’s funeral with guns and a flag. But he also wrote:

“My wife’s mother, now 94, is upset and concerned that her father would be represented as a criminal… she would prefer that his photo and profile be removed from the book and the blog.”

What could I say? It’s an understandable request, so I took down the post.

That’s the first time any relative of one of the people in the mug shots has been unhappy with me telling the person’s story. Usually they seem pleased that someone has spent time thinking about their life and marking it in some way, even if that marker happens to be a story under an old mug shot. It’s surprising that there aren’t more people who don’t want their family’s business to be published on the internet. Then again, it’s also surprising that we’re able to buy people’s old mug shots on eBay, but there we are.

However, there’s a lot of small details in the businessman’s story that I love—the exotic branding of the swimming hole; the existence of a night club act called Blossom Alta; the fact that, at one point in Italy’s turbulent 20th century, running a macaroni factory in New Castle PA qualified a person for high office—so below is a version of the post with his name redacted.

A swimming hole was formed on the Neshannock creek north of town when the paper mill built a dam in 1833. It was known as paper mill beach, and a boy would drown there every year or two. In 1917, a man named Bill Hill bought a meadow beside the dam and erected concession stands and a dance hall. He encouraged people to call the place Hill’s beach, which they did. In 1939, the land was bought by a local businessman, E                  .

E’s father had come to New Castle from Italy in the early eighteen-nineties. With his brother, he opened a macaroni manufacturing plant and became a wholesale importer of olive oil, olives, cheese and hams. After twenty years in business, his brother returned home, where he was appointed minister of finance in the Italian government. E’s father stayed in New Castle.

E was his father’s first son. In the thirties, he opened New Castle’s only night club, a little way up the Neshannock from the center of town. It had two floor shows every night—such acts as Ann Vallee, “a sweet, beautiful songstress”; Dave Rose, “a singing comedian who puts comedy over with musical accompaniment”; and Blossom Alta, “eccentricities”. People danced under palm trees to the music of the Sophisti-Kats, the Streamline Swing Band, the Rhythm Kings. It was called the Casino. Gambling was illegal, but went on in a small way. E was arrested a couple of times for running numbers games. There is no record of any penalties.

E changed the name of the swimming hole to El Rio beach. (Bathing tickets 10 cents.) In the summer, it would be booked up every day with society picnics and factory outings. A couple of thousand people at a time would attend weekend dances. E kept the set-up that he had inherited from Bill Hill, without doing much in the way of maintenance. In 1960, the porch of the dance hall collapsed during a fireworks display, sending fifty people to hospital.

The place got more run down throughout the sixties and families started to stay away. There was a suggestion that a huge cave in the park might be turned into a nuclear fallout shelter, but nothing came of it. In 1967, the city bought the park from E for $25,000, in hopes of reviving it. Someone set fire to the dance hall a few years later. By the end of the seventies, no one much went there anymore.

Once again, please go to Unbound to support the publication of the Small Town Noir book. Spread the word, too — I can’t do it without you!