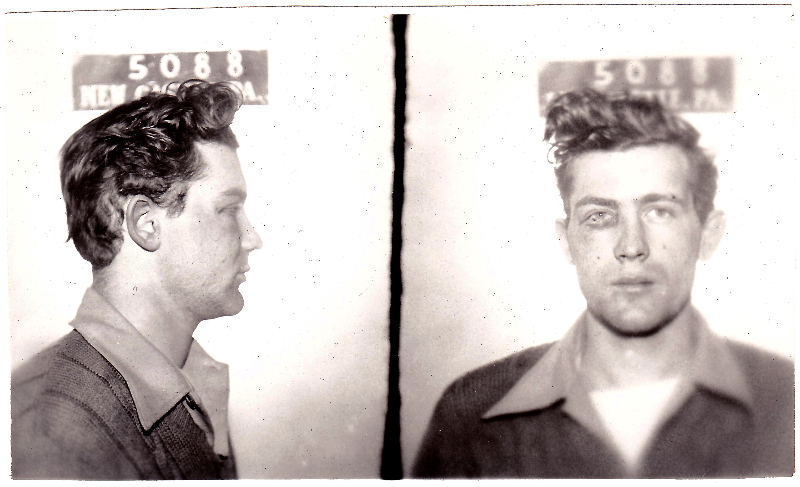 Joe Ritter’s brother, Otto, was twelve when Joe was arrested in January, 1949. He’s in his late seventies now and lives just outside New Castle, the only one of Joe’s family who’s still alive. We’ve spoken on the phone a couple of times. It took a while to convince him that I really was writing a book about people like his brother—ordinary people in a collection of faded photographs that just happen to have been taken by the New Castle police years ago—but when he was sure I was who I said I was, he spoke for a long time about his brother’s life. Much of what follows comes from those conversations.

Joe was charged with pulling a loaded revolver on a man during what seems to have been a fight over a girl. Joe was twenty-two; the man, Joseph Chabak, was forty-seven. (The girl might have been his daughter.) Joe had followed Chabak and the girl in his car as they drove home from somewhere at 1 o’clock in the morning. He kept swerving his car towards them, trying to force them off the road. When Chabak pulled over outside his house on South Jefferson street, Joe climbed into his car and started punching him. Chabak’s wife called the police. By the time they arrived, Chabak had pinned Joe down on the ground. They found the pistol in a hedge.

It was a bad time for Joe to get into trouble. He was in a country and western act with his friend, Bob Pandice, “the Yodelin’ Cowboy” (or, sometimes, “the Personality Troubadour”). They both sang and Bob played guitar. They had a half-hour music show every Thursday morning at 7:30, broadcast throughout Lawrence County. They had just played a big farewell show at the Columbus Hall and were waiting for Bob to get his license so they could drive to California to make it in the movies.

Joe got lucky. The case didn’t go to court. Bob passed his test the following week and the boys left town before the end of the month, driving through the south. They spent some time in Los Angeles, and ended up in San Francisco, where Bob worked for a while playing hillbilly songs on KSFO California’s new television network. They lasted six months. By August, they were back in New Castle, full of stories about Hollywood and billing themselves as “New Castle’s movie and television stars”: 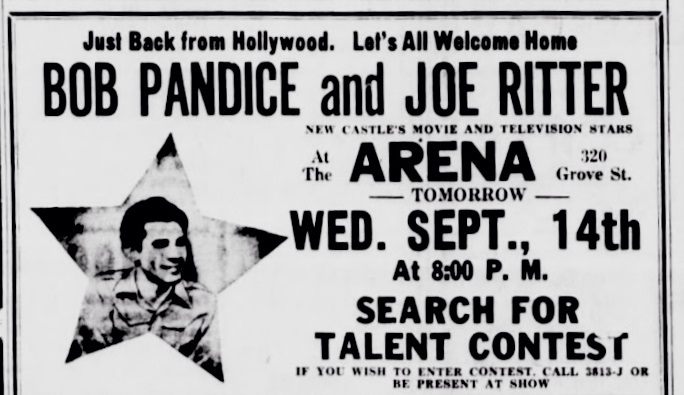 They’d managed to get work in a couple of films—westerns, because they could supply their own costumes. One, “Brothers in the Saddle”, came to the Paramount in New Castle later that year. Joe took his whole family to see it, but his big screen debut wasn’t all they’d hoped it would be. He might have been one of the saloon patrons looking the other way as Tim Holt confronts a gang of crooked gamblers: 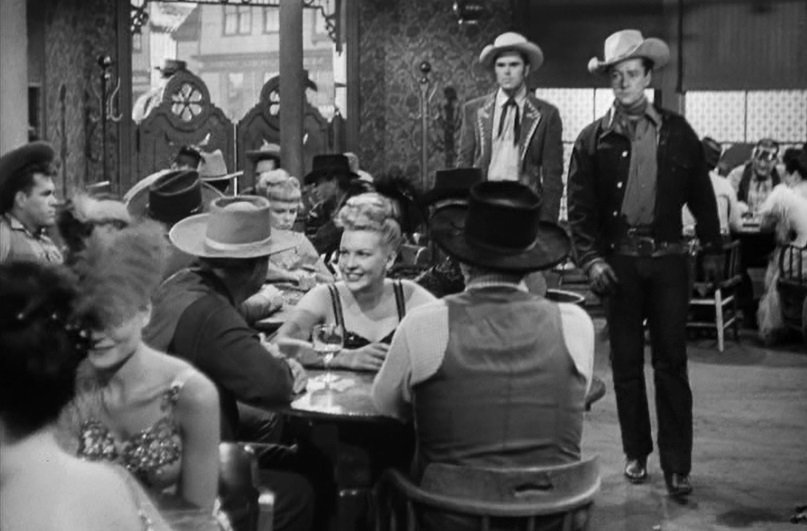 Or perhaps he was one of the cowboys who want to lynch Tim Holt’s brother: 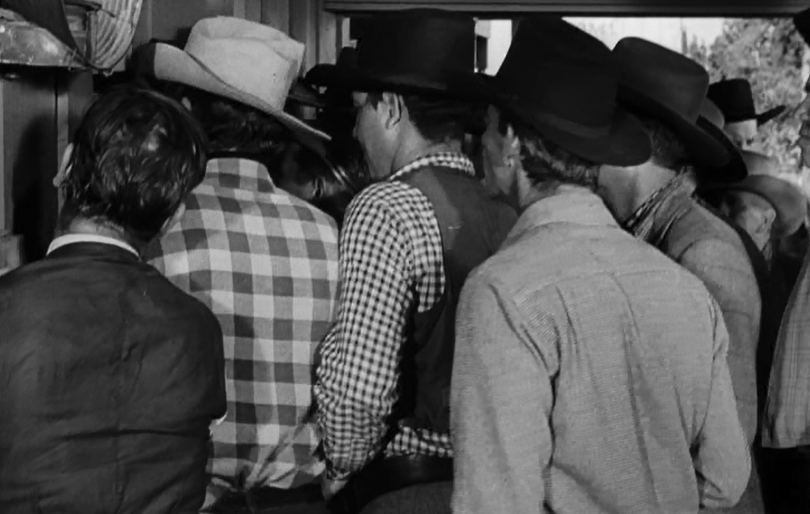 Or maybe he was somewhere in the crowd of townsfolk who watch Tim Holt ride out of town: 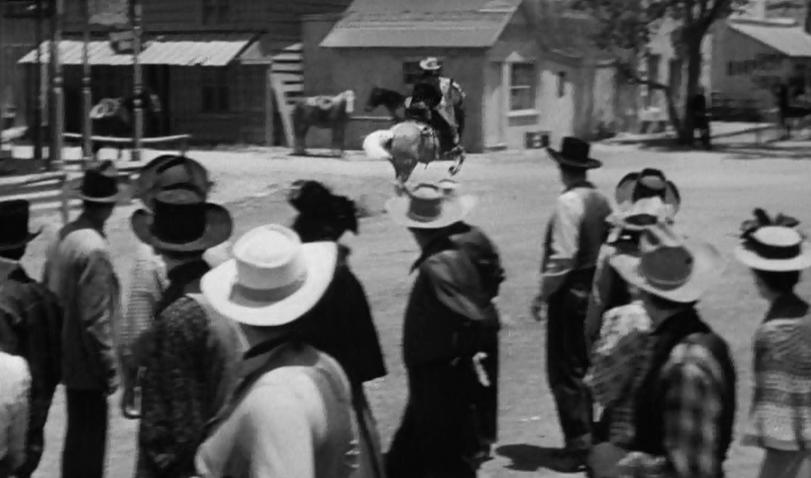 Whatever scene he was in, his Stetson got more screen time than he did. The other film, “Horsemen of the Sierras”, one of sixty or so B-movies featuring Charles Starret as the Durango Kid, never made it to New Castle.

Joe and Bob planned to go back out west once they made a bit of money—Bob told people he had a screen test with a real Hollywood studio—but Joe got engaged that November and became a father a few months later. That finished his career in show business. Bob stuck with it for a few more years, recording some 45s with a backing band of local musicians he called the Sunset Riders. He gave it up sometime in the fifties and got a real job. He died in 1977, at the age of forty-six.

Joe had worked in lots of jobs. He’d quit school in 1944 and joined the navy. He spent the tail-end of the war with the Seabees, building airstrips in Alaska so B-25s could bomb Japan. He’d been a fireman on the railroad until they transferred him to somewhere up around Cleveland, which he hated. He’d worked in a ceramics plant in New Castle, making bathroom fixtures. That didn’t last too long, either.

After he got married, he drove for a trucking company in Sharon, then he bought his own equipment and set up a haulage business. He drove trucks for the next four decades.

In the summer of 1992, Joe started up a tractor inside a storage building where he kept fuel. The tractor backfired and set off the fumes, and the building exploded. Joe escaped but went back in to rescue a new piece of machinery. He was very badly burned, on his arms, especially. His fingers fused into claws when they healed. Joe had had health problems—diabetes, mostly—for years. The accident sent him into a decline, and his diabetes got worse. He died in 1995, at the age of sixty-nine.

When we spoke on the phone, Otto Ritter spoke freely about his brother; about Bob Pandice and the radio show; about the mule wagon that Joe and Bob had collided with in Georgia when they were on their way to Hollywood; about diabetes, which he suffers from, just like Joe. But he batted aside the subject of Joe’s long-ago arrest. He was just a kid, and probably no one told him about it. And he doesn’t care, anyway.

Whatever the reason for the fight that night in 1949, it’s entirely forgotten. The only evidence it ever happened is one old newspaper story, and Joe’s black eye in a mug shot that I’ll soon seal up in an envelope and mail back to New Castle, where his brother can do with it what he likes.

Once again, please go to Unbound to support the publication of the Small Town Noir book. Spread the word, too — I can’t do it without you!