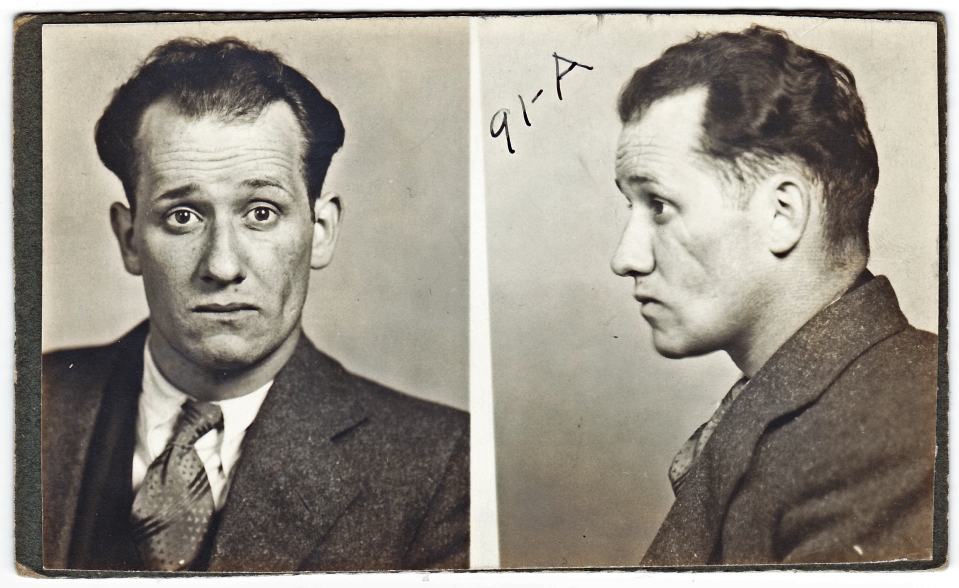 Donald Wells was a brakeman for the Pittsburgh and Lake Erie railroad for nine years until he was furloughed when the steel factories shut down after the Wall street crash. He had done casual construction work since then, travelling as far as Tennessee for a structural iron job, and he’d served a little time in the workhouse for larceny and burglary. He had a wife, but had been sleeping in his car for the past while.

In May 1932, Donald and a man named William Thompson left Pittsburgh and headed west, taking with them a set of safe-cracking tools and a couple of guns. They ran out of gas in New Castle, with only 40 cents between them. Around one in the morning, they climbed onto a low-roofed building behind the Diamond and jemmied the window of a second-floor toilet at the rear of Haney’s furniture store. They found a safe in an office on the floor below.

A patrolman walking in the alley behind the store heard the sound of a hammer striking steel. More police came, and two of them climbed through the toilet window, which was still propped open.

Donald and William had broken off the safe’s combination dial but were still trying to open the door when they realised someone was inside with them. They hid their guns in the office and ran upstairs, where they wrapped their chisels and drills in a towel and stuffed them behind a toilet before finding a way into an upper floor of the neighboring building. A stairway led them down to the street, a few doors away from where two patrolmen were waiting outside the Haney store. The police chased them back and forth across the Diamond for a while. When they started shooting, Donald and William ran into the alleys behind the buildings. They ended up in the parking lot of the Leslie hotel, with police at every exit. Donald was discovered behind a box; William behind the garbage can at the hotel’s kitchen door.

Donald served two-and-a-half years in the Western penitentiary. He was arrested again within months of his release, trying to rob the safe of the Goodrich filling station in Mount Lebanon. He got another six years, which kept him inside until 1941. By 1944, he was part of a group of safe-crackers who worked across western Pennsylvania. The police called them the hammer-and-pin gang. They did a couple of jobs a month, taking around $70,000 a year, and spent the money in gambling joints in Pittsburgh.

At four o’clock on a spring morning in 1947, Donald and another member of the gang, John Romito, broke into the Ramsey garage in Zelienople and set about opening the safe. The noise woke the apprentice mechanic, who had a room upstairs. He telephoned the owner, Arthur Ramsey, who got his gun and drove over. Donald heard the car pull up outside. He shot at Ramsey when he entered, hitting him in the hip. Ramsey fired back. They shot at each other until they ran out of bullets, then Donald and John ran outside.

Donald had been shot in his mouth and chest. He stumbled into ditch a few yards outside the garage. The police found him there, choking as he struggled to breathe. He died without saying a word, still holding his gun.

John was picked up on route 68 a few hours later. After he was jailed—he got ten to twenty years—the police arrested the other gang members. He testified against them in court, saying that he wanted to tell the truth so he could square himself with his religion. He died of a brain tumor in 1961 at the age of seventy.