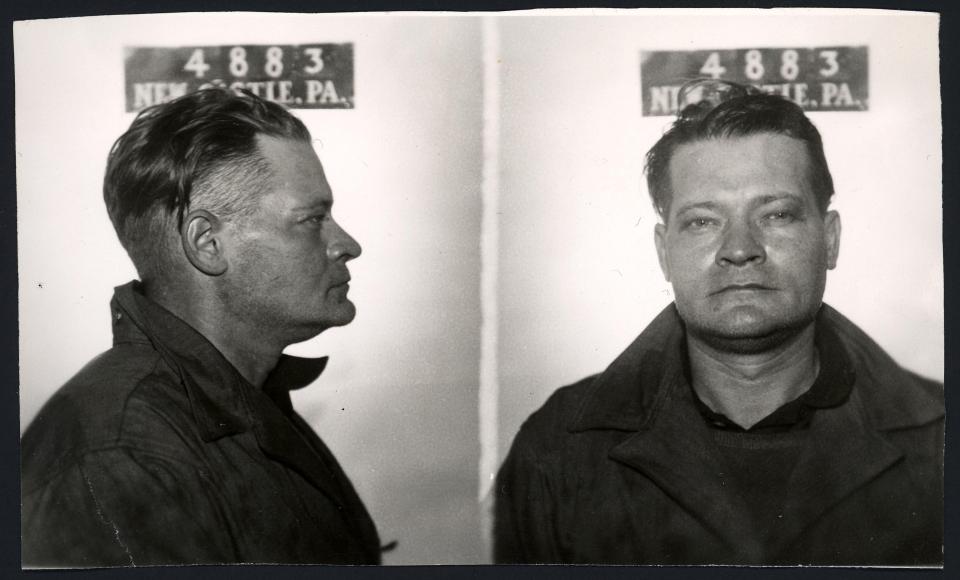 Morgan Fobes, the young man who would become the father of Martin Fobes, grew up on the old plank road to the north of New Castle, in a log cabin that his grandfather had built when he arrived from Württemberg in 1868. He ran away from home in 1908 when Katy Blews, the crippled girl next door, fell pregnant. The police were ordered to find him, but he eluded detection for almost the entirety of Katy’s confinement. He was eventually tracked down and arrested as he played cards in a miners’ shanty nearby. The case was settled by marriage. Two weeks later, Katy gave birth to a son—Martin. By the time Martin turned eighteen, in 1927, Morgan had taken up with a woman named Rose Boalick and had been absent from the household for some time. Katy divorced him and secured a court order forbidding him from marrying his mistress.

Martin himself was married before he was twenty and had a daughter soon after. He worked in factories in New Castle and Youngstown, apart from a spell in the army during world war two—he was drafted five months before the end of the war—and spent his evenings in the bars downtown.

In January 1948, when the police asked Martin to tell them what he had done on the night of the fifth, he told them he remembered leaving the Rex Café some time after midnight with twenty-three-year-old Anna Grace Robertson and her sister, but nothing after that. He said he had woken up with a hangover at about five o’clock the following morning, lying on his living room floor. He didn’t know how he had ended up there or what had happened since he left. The police told him that Anna Grace was in a coma in the hospital, having been found battered and bleeding in the middle of North Mercer street a few hours earlier. Martin told them he knew nothing about that.

Anna Grace never regained consciousness. She died three days after being admitted to the hospital. A post-mortem found the cause of death to be haemorrhages of the brain. She also had a complete fracture of the left jaw, partial paralysis of the left arm and left leg, and friction burns on her face and right knee.

At the inquest, Martin said, again, that he had no recollection of what had happened that night. Others filled in some of the blanks.

Anna Grace’s sister, Eris, said that Martin had taken her and Anna Grace home from the Rex Café, where they had met him. Anna Grace knew Martin, it seemed, but Eris had never seen him before. When they got to the house, instead of coming in with Eris, Anna Grace went off with Martin. They said that they were going to a café called Jim’s Place on the east side, and were then going to the Square Deal to meet Anna Grace’s mother, who worked there. It was half past midnight.

The bartender of the Rex Café, William Weidenhof, had gone over to the Square Deal after closing up his place, and saw Martin and Anna Grace there. Martin was drunk, and kept asking Anna Grace to leave with him. Eventually, just before two, Weidenhof saw Martin take Anna Grace’s arm and lead her to his truck.

About twenty minutes later, a man called Louis Smith found Anna Grace lying in North Mercer street, unconscious, with a bloody nose and a bruise on her forehead. He called the police, and an officer took her to the hospital.

People who had met Martin in town the next night, back in the Rex Café again, told the inquest that he seemed “pretty well loaded” and had scratches on his face. A friend of Martin’s, Joseph McKee, asked him if he knew what had happened to Anna Grace, but Martin ducked the question, saying only that he had been in a wreck at the harbour at about 4.30 am, but that everything was “on the up and up”. Later that evening, he passed out in the bar.

The inquest declared that it was unable to determine how Anna Grace sustained the injuries that caused her death and recommended further investigation. There was none. Anna Grace had already been buried, the witnesses had said all that they could and Martin Fobes wasn’t saying anything else.

Anna Grace died because she jumped from a speeding truck. Before she jumped, she found it necessary to scratch Martin’s face. Her body was found on the road leading out of town, at a point where it would have become obvious to her that Martin had no intention of driving her home and that he had something else in mind. Despite these facts, the case was dropped and Martin was charged only with driving a motor vehicle while intoxicated and leaving the scene of an accident without rendering assistance. He spent the rest of his life working as a field-car repairman in the Youngstown Sheet and Tube Company and participating in the activities of lodge 51 of the Loyal Order of the Moose. He died in January 1969, at the age of fifty-nine.